Autistics are often interested in pop culture. It is a popular special interest because it’s something that autistics have been exposed to at a young age. But what happens when an autistic gets involved with pop culture themself? Jorge Gutierrez is an autistic cartoonist from the United States of Mexican descent. He is known for creating series and films such as El Tigre, The Book of Life, and Maya and the Three. Jorge has a unique art style. Inspired by Mexican culture, his art style calls back to Mesoamerican folk art also known as artesanía, marked by its geometric shapes and bold colours.

Gutierrez talked about his autism on April 2nd this year on Twitter. He spoke about how his autism affects his work. He is especially keen on writing outsider stories. Some examples he provided when talking about his autistic influences were the characters Chimi and Rico from Maya and the Three. Chimi was abandoned as a child for being an albino and thus had to figure out life on her own, while Rico has special powers that were considered taboo by his community.

In this exhibition, two of his works are presented. Both are references to fictional characters from animated series from the 80s and 90s. The paintings are done in a stylized manner, putting emphasis on trying to give an impression of blocky, round shapes with swirls throughout, rendered with the colours cyan, magenta, yellow, and black in a way that doesn’t hurt the eyes yet still give a bold statement.

El Master del Barrio depicts Skeletor, the main villain of He-Man, a popular toy franchise in the 80s that got adapted into an animated series by Filmation. Skeletor’s face is the centerpiece of the painting, with his iconic laugh “Myaaah!” written on the left of the painting. His right (our left) eye socket contains his arch-nemesis He-Man with a crown, while his left (our right) eye socket contains Beastman. On the bottom, there is a yellow bar with a large text that reads “ESQUELETOR”.

El Morro Simpson depicts Bart Simpson from The Simpsons, a long running animated series by Matt Groening. Not only is it popular in the United States, but its fame has reached Latin America. In fact, it is the most popular imported show in Mexico, as the show’s dub debuted in 1990. In the painting, the beloved character wears a white tank top with a picture of a skull, some blue shorts, and blue pants, as he is riding on a black skateboard. He wears what is similar to a rim of a sombrero with text that reads “Eat my shorts, Gringo! Ay Caramba!!!” Bart’s right fist reads “Love” while his left fist reads “Hate”. There are two big text bubbles. The one on the left is black and contains a stylized feces icon with a smiley face on it, while the one on the right is blue and has the stylized face of Homer Simpson accompanied by the text “Homero”. The bottom text is presented similarly to the one found in El Master del Barrio, and it reads “Bart Sanchez”.

The paintings presented are a manifestation of how many people outside of the mainstream culture depicted in Western media perceive Western culture. Gutierrez altered popular cartoon characters into a style that his culture is more accustomed with: more geometrical shapes and vibrant colors. He gave attributes to them and transformed them into more familiar figures. Fortunately for Gutierrez, he has entered the animation industry and has created his own characters that are closely associated with his culture. 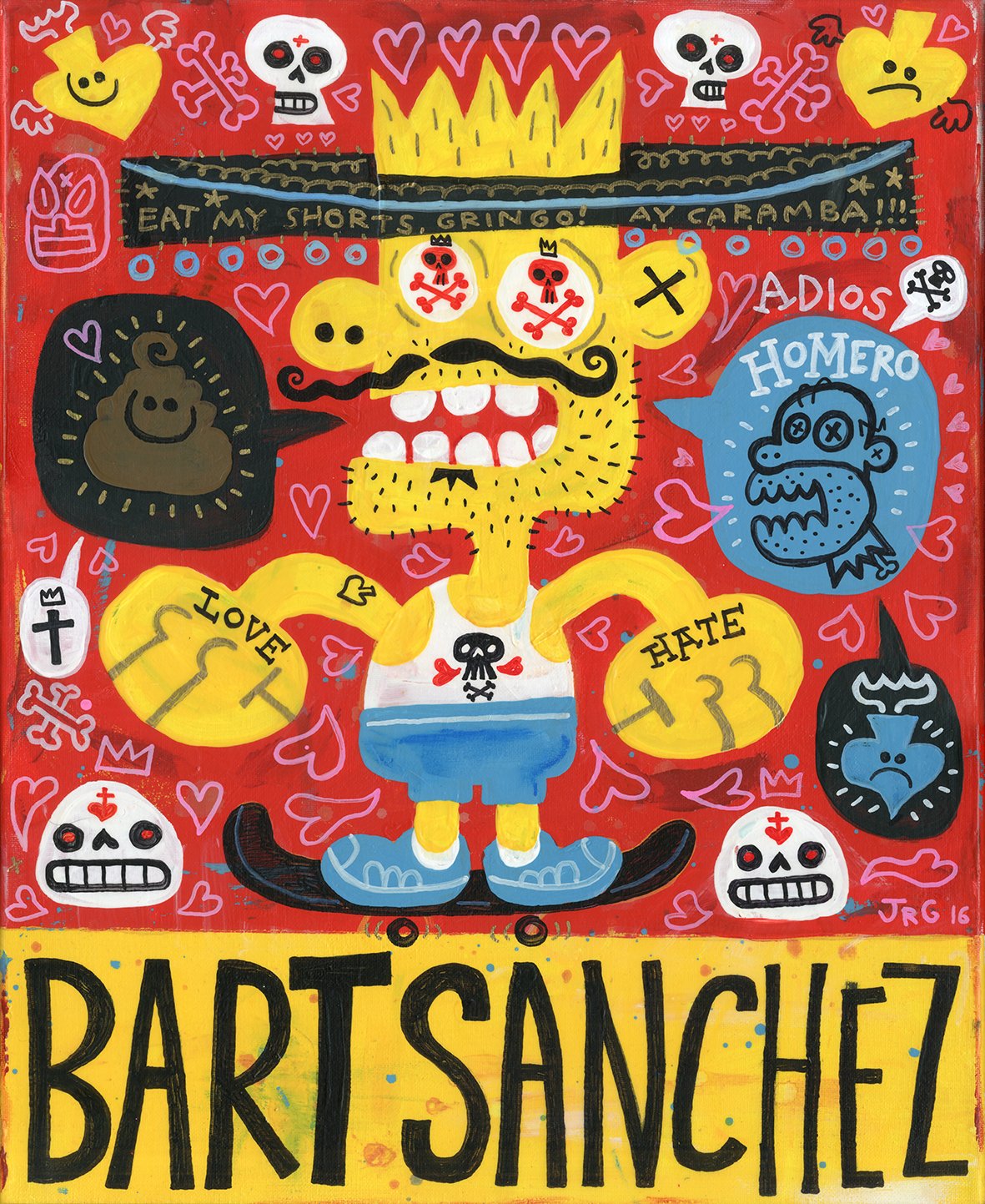 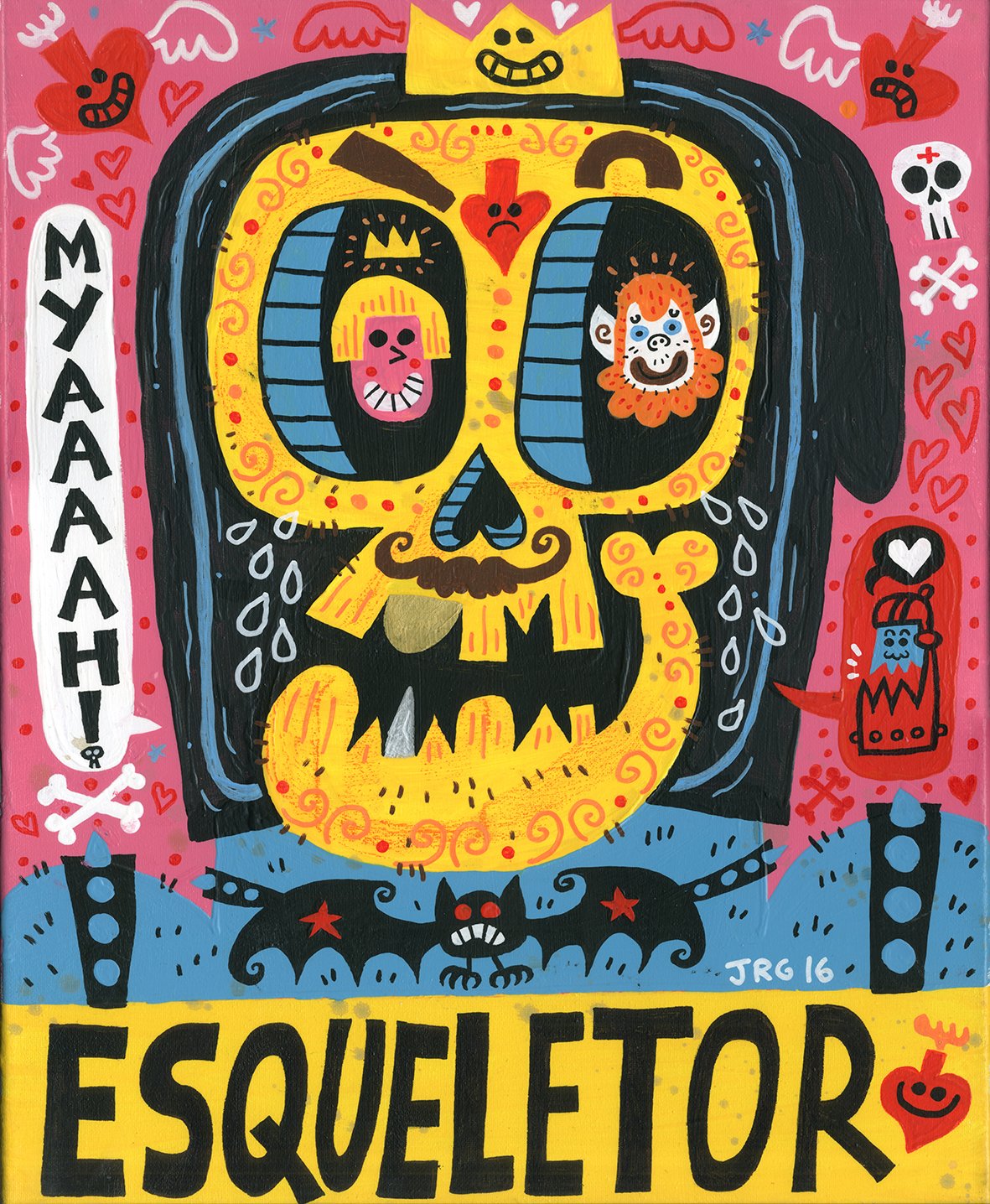 I am very influenced by the disposable and nostalgic pop culture of the entire planet but especially that of the USA, Japan and Mexico.

I grew up in Tijuana, Mexico which has one of the busiest borders with the USA. Growing up with a foot on each country really affected me as an artist and storyteller.

What’s your favourite piece of pop culture? Be it a TV show, comic, or music.

I really love cultural mash-ups and evolutions so I’m a big fan of Rick and Morty which would never exist without Back to the Future movie and cartoons.