Graham Dolphin is a UK-based artist who explores the concept of fandom and how it mimics idolatry of monuments produced by the times of old. He does it by reconstructing artifacts related to pop culture icons, which he would then produce various scribbles on them.

Door (Freddie Mercury’s Version) features a replica of the late pop star Freddie Mercury’s door which was located in London, England. Freddie Mercury is known for being the leader of the British rock band “Queen” which produced legendary songs such as “Bohemian Rhapsody” and “We Are the Champions”. The artwork depicts a wooden green door with an arc on top, with text which reads “Garden Lodge” and beneath it is “1 Logan Place”, all caps. On the door there are scribbles which reads various phrases like “I still love you”, “I love you Freddie forever”, and “Paul”. The door sits peacefully alone on top of a pedestal.

Jim Morrison, 1985 is a statue of the late Jim Morrison, the leader of the Los Angeles-based rock band “The Doors”, mostly known for their song “Light My Fire”. The work itself is a replica of a statue that was erected in 1981 by Mladen Mikulin to commemorate his death. The roughly-sculpted plaster sculpture depicts a bust of Jim Morrison. The statue’s head is coloured blue, as if it was added on to the white material. Outlines are scribbled around its eyes like a pseudo eyeliner, one of them is coloured similarly to its hair. Its lips has a slight red tint. Like Door, Jim Morrison has scribbles written all over it, with writings such as “Joy”, “Franz”, “Bruno”, and “Forever”.

As we move away from Western icons, Sink depicts a laundry sink where Argentine-born guerilla fighter Ernesto “Che” Guevara’s body was displayed after his execution. Che Guevara’s imagery became famous in various merchandises, even by consumers who were unaware of his cause. The sculpture depicts two rectangular laundry sinks, coloured similarly to cement. There are scribbles written in Spanish. One of them is “Tu Prescensia Esta Viva” with a star. In fact, there are a lot of stars as that is a common communist logo.

The works selected are based on real life objects that had similar scribbles with history related to fandom activity ranging from dedication to full on worship. Door is based on Freddie Mercury’s mansion door which along with its surrounding walls, became a place for fans to place love letters and scribbles before it was taken down by his ex Mary Austin in 2017, now leaving the door and walls untouched with warning signs and CCTV. Jim Morrison was based on a statue that was built for his tombstone. It went through various stages of graffiti and scribbles. It was even given gifts such as flowers and bottles of wine. The statue was ultimately stolen in 1988. Che Guevara’s death in Vallegrande, Bolivia has become a tourist site. He was even canonized as a saint in the country as “Saint Ernesto”, and the laundry sink has become a place of pilgrimage. Dolphin’s presentation of the replicas into art galleries has validated these pop culture artifacts, putting them on the same level as art depicting deities in pre-existing religions, including Michelangelo’s Moses and Leonardo da Vinci’s The Last Supper.

On the other hand, many proponents are against the idea of scribbling notes on monuments. It is argued that scribbling on monuments is an act of disrespecting it. This sentiment has been shared by Mary Austin with Freddie Mercury’s door. While this isn’t actually the case for Freddie Mercury’s situation, as with Jim Morrison and Che Guevara’s, there have been instances of graffitis on monuments that were meant to be done as a provocation. For example, there was a graffiti of James Cook, a European who founded New Zealand/Aotearoa, which writes “Thief Pakeha” (pakeha is the Maori word for “foreigner”, usually referring to Europeans) and “This is Our Land”, expressing the contempt of the native Maori tribe towards the colonization of their land by the British.

With this sentiment being popular, it is rare to find graffiti similar to what is depicted by Dolphin in modern monuments and statues of pre-existing religions. However, this idea is fairly recent. Back in the Medieval Ages, religious sites would be filled with prayers and seals as a protection from demons. Even during the Victorian Era, tourists would inscribe prayers and Biblical text on monuments such as the Stonehenge.

Dolphin’s work document the perseverance of a particular religious practice from the past through modern artifacts, while elevating them to be one the same level of what modern society perceives as artifacts of religious antiquity. One of a series recording the progressive deterioration by fan graffiti of a bust of Jim Morrison, produced by a fan and left on Jim Morrison’s grave at Père Lachaise Cemetery in Paris. 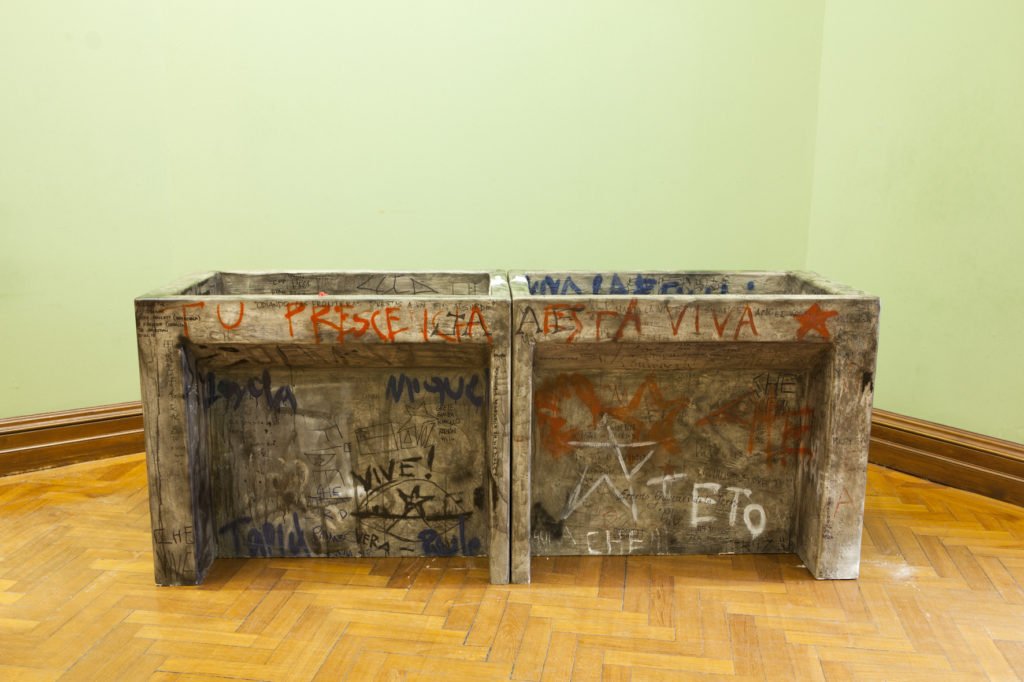 As a teenager, when I became aware of culture, it was mainly American and English pop culture, seeing or hearing anything else was impossible in the small town where we lived. As I became more aware of the people that were behind the music and films I liked I would track back through their influences to see where they had taken inspiration from. This was mainly sourced through interviews in the music papers, NME, Melody Maker, Sounds and the odd film magazine. Although my influences became less ‘mainstream’ they are always located in popular culture. I would consider music my most important influence with art running a close second or third. The emergence in music of post-punk, no wave and grunge in the 1990s was and still is important, this felt like art as well as music. Dance culture and the DIY bedroom making of techno was also important while I was at university.

Growing up it was hard to see any other cultures other than American and English through film, TV and music so these all had a big influence on my identity, we lived in a small town without any museums or art galleries so art was never present in my life until I started studying it later on. We did though go to the cinema almost every week and we had video player early on so I spent much of formative years watching films. My older brother was and still is my guide to a lot of things, especially music and luckily we had a very good music lending library in our town so we could hear many different styles of music without it costing us very much. It was hard to get any information about the music we were hearing so we made our own covers for the records we had taped, they became our own copies that were precious. This idea of ownership and identifying through pop culture has formed all of my subsequent work.

That’s a very hard question and it would change almost every day!

If I had to choose my favourite band would be Sonic Youth as they fused music, noise and art so well, recently I’ve bee listening to the American composer Moondog a lot, he fits in with my love of ‘outsider’ music and art – people that aren’t traditionally taught.