One aspect of autism that is often talked about is making art. In the general art world, art created by autistics a.k.a. “autistic art” is often brought up alongside outsider art, a genre of art done by artists who have little to no relationship to the art world. In fact, the French term Art Brut, was originally attributed to artists whose mental conditions have separated them from societies at large.

Outside of the fine art world, there are many works done by autistics in pop culture. While autism is a broad spectrum and there are autistics whose artistic abilities fit the standards of the pop culture industry (see Jorge Gutierrez), there is a group of pop culture art created by autistics that share a similar style. One striking characteristic is that they use tools that are introduced as a child, such as crayons, markers, and colored pencils. Nowadays you can even see them done using MS Paint and Photoshop. The lines are often drawn in a straightforward way. The use of colors is sparse, but it is that sparseness that is able to convey the object clearly.

One such artist is Jackie Cousins Oliva, an artist from the UK who is into WWE, as expressed in her works Billie and Shirley. Billie is dedicated to Billie Kay, the WWE alter-ego of Australian pro-wrestler Jessica McKay. It is a mixed media art piece drawn with a light blue background with polka dots. The most prominent aspect of the drawing is a full-body depiction of Billie Kay, a white woman with short black hair wearing a black unitard and black boots. Surrounding her are various moments of Billie throughout WWE, most of them are of Billie performing various pro-wrestling moves. Billie herself is wearing various costumes, such as a red, white, and blue unitard with a row of red stars and a purple unitard with a white string tied around it.

Shirley is a mixed media piece dedicated to a pro wrestler named Shirley Harris. It is a drawing with a purple background. On the right is Shirley Harris, a dark-skinned woman with long brown, curly hair tied into a ponytail wearing a gray dress that reads “Dancing is what to do” with purple hearts. She wears sleeves and leggings that spell her name. On the left are depictions of Shirley performing moves on other wrestlers. She has two different outfits: one is a black two-piece with detached sleeves that spell her name and black thigh-high boots, and the other is a yellow two-piece with a gray stripe and yellow shoes accompanied by white knee-length socks.

Her art shows her interest in women’s pro wrestling showing off their physical prowess, as Cousins Oliva puts out a detailed look at their dresses and anatomy as they perform their moves. The women in the picture want to look pretty and do some neat action moves at the same time, as those two are not exclusive to each other, and the art perfectly portrays that as they depict the many dimensions of women’s pro wrestling. 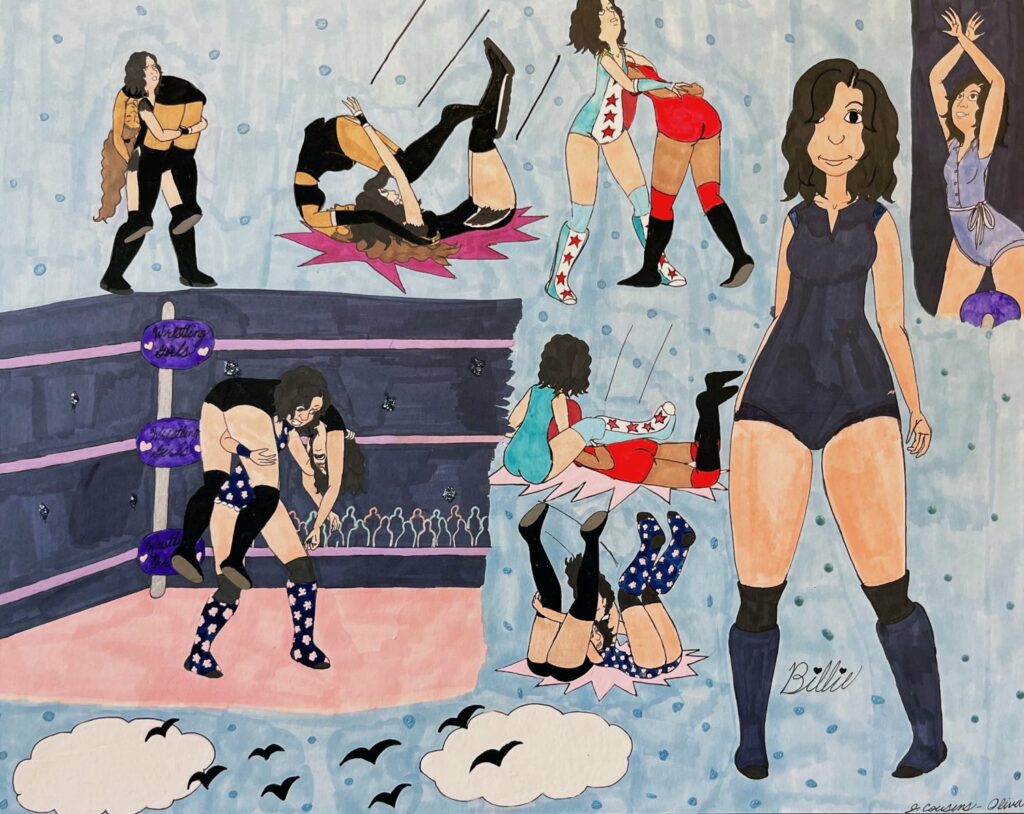 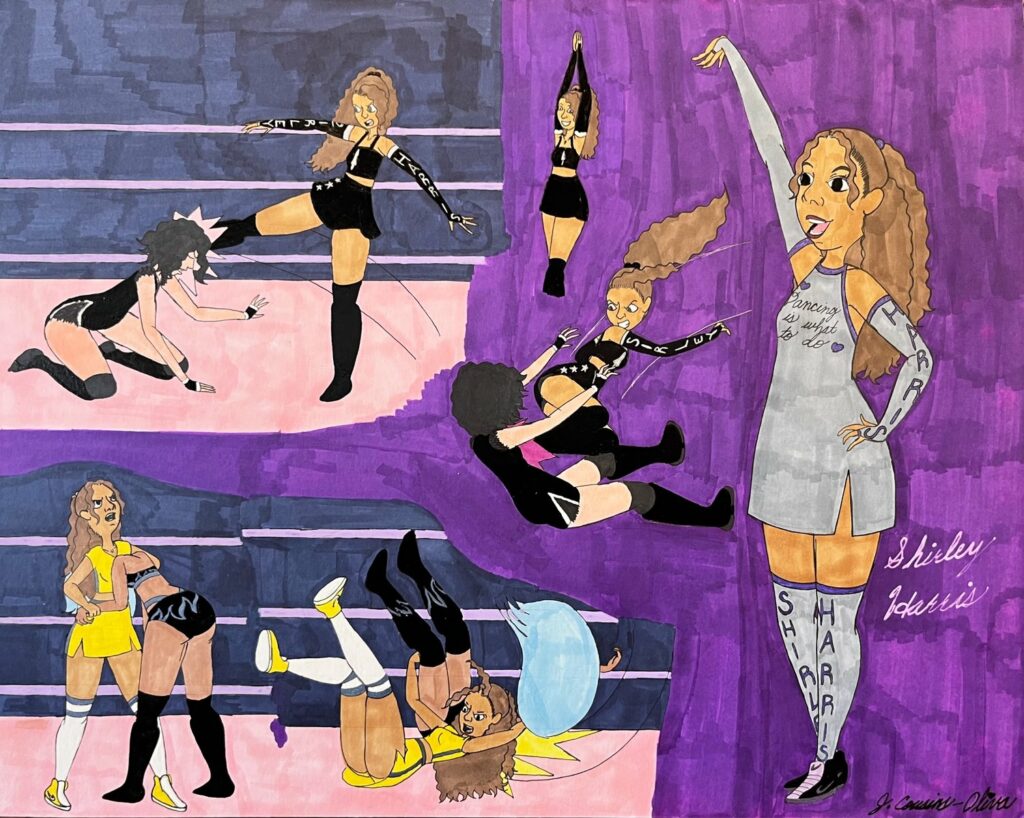 Jackie’s characters are inspired by American culture, specifically the Afro-American/Black culture and Latin American culture in the Southside of Chicago. Billie and Shirley are tough yet stylish Southside Grrls. According to Jackie, Billie was a bit spoiled by her family though. Cousins-Oliva is a huge fan of the WWE, House music, R&B, action movies , and detective shows such as Law and Order and NY Undercover. Her favorite genre of pop-culture is wrestling and Archie comics.

Jackie is an artist with Project Onward.