Celebrities have become the cornerstone of human life. There are celebrities who started spreading their awareness through media, especially through film and television. Sometimes they would move on and use their fame for other things, such as activism and marketing. One such celebrity is Arnold Schwarzenegger. Born in Austria in 1947, Schwarzenegger gained fame by winning the Mr. Olympia title seven times. After he retired, he became a Hollywood actor and starred in various hit movies such as Conan the Barbarian and the Terminator series. In 2003, he became the governor of California until 2011.

Beth Emily Richards portrayed his legacy through “ARNie!00”, an installation piece previously displayed at the “Many & Beautiful Things” exhibition. The work consists of a white wall divided into two. The upper part has repeated prints of Schwarzenegger’s head aligned as a grid. Beneath the divider is the same prints of Schwarzenegger’s head but downscaled to look much smaller. Close to the floor on the right side is a power socket, emulating a home setting. The prints were done with fake tanning spray, a product that Schwarzenegger liked to use, especially during his bodybuilder days.

The way Arnold Schwarzenegger’s face is printed on wallpaper in this piece is not dissimilar to the fleur-de-lis motif. Mostly popular in France, the symbol is based on the lily which represents the Virgin Mary and Saint Joseph, and encompasses religious and political meanings. The fleur-de-lis would then be used in various royal emblems in France, England, and many other European regions. Perhaps the placement of Arnold Schwarzenegger not only depicts how celebrities permeate into the mundane everyday life, but also place themselves to be as exalted as the gods and kings.

For many people, especially in the secular world, celebrities in a way have filled the void gods, prophets, and even the more contemporary heroes have left. “ARNie!00” was created to portray fannish desire, as fans put pop culture icons onto a pedestal. This can be in form of fan art and fan letters, putting them onto a shrine. Celebrities from the 1980s; when American television started to flourish, were placed even higher on the supposed “pop culture pantheon”, for being the first ones to be accelerated onto globalised awareness. Even now in the 2020s, the celebrities from back then were called back to provide a sense of nostalgia, which is yearned so much given the hard times going through war, pandemics, financial recession, and climate crises. 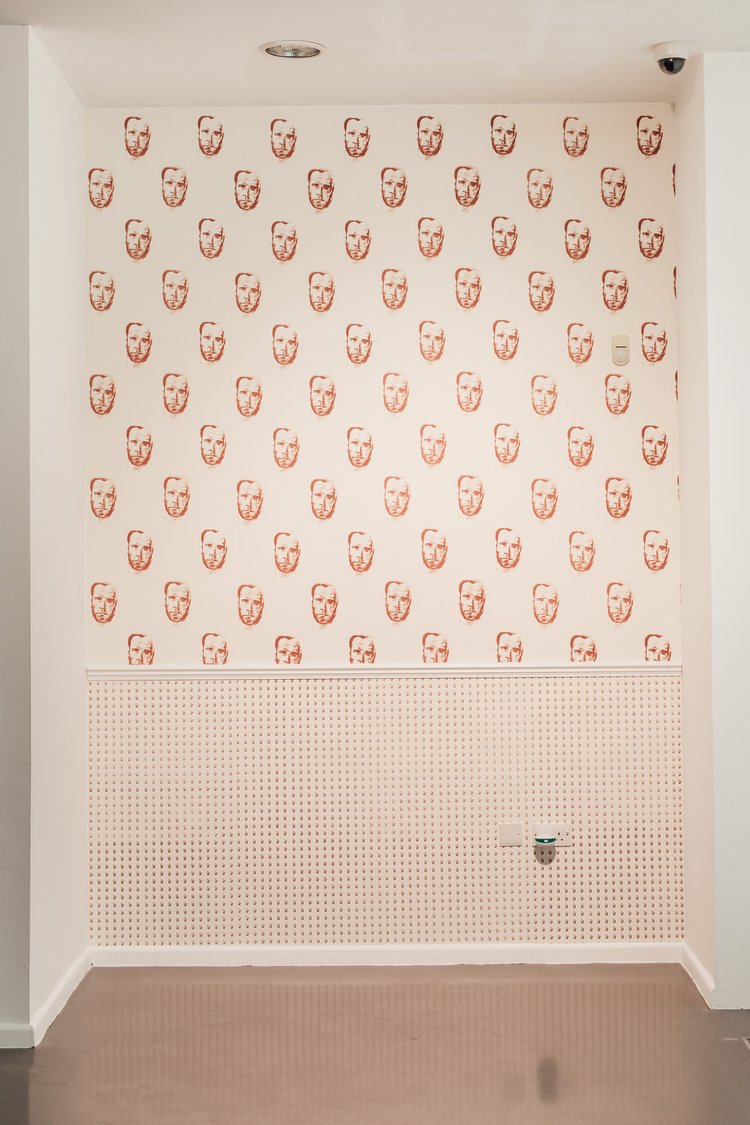 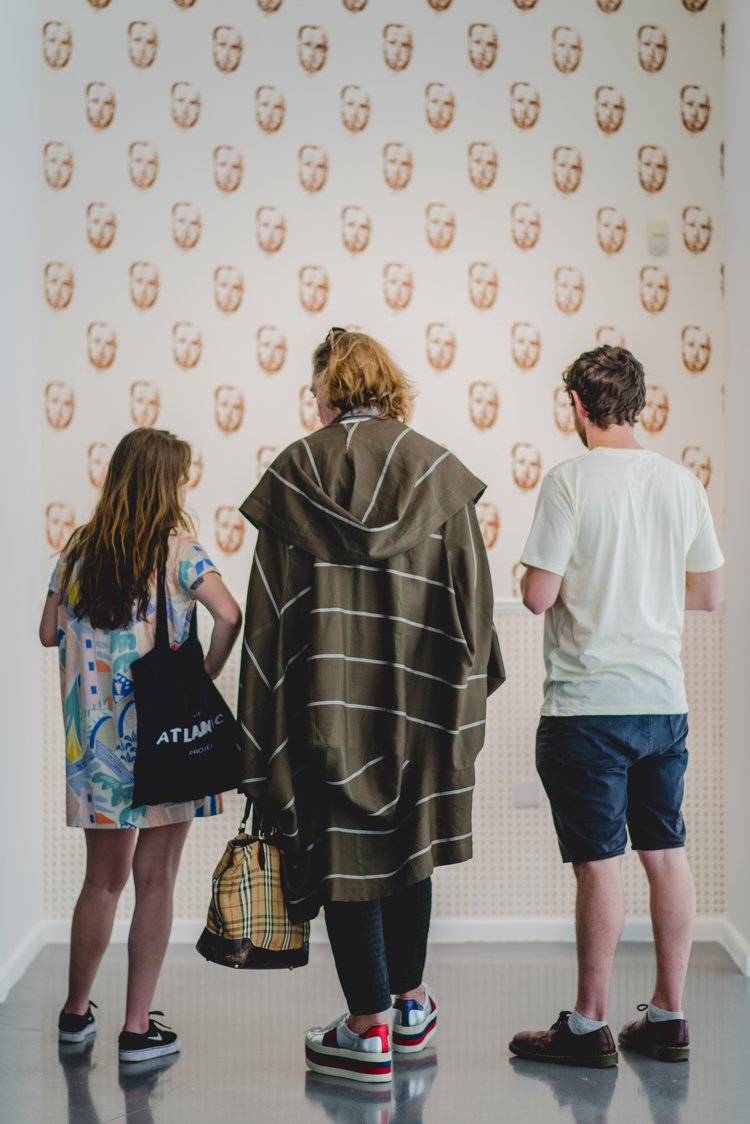 An installation with repeating wallpaper pattern, featuring appropriated fan art of Arnold Schwarzenegger, printed using bodybuilders’ tanning oil as pigment and accompanied by its aroma from a plug-in diffuser.

A number of fan cultures and tropes influenced this work: obviously first of all, it’s Arnie himself in his many permutations, from bodybuilder to 80s/90s action star, to politician, to social media star with his mini pony and donkey pals. Secondly, fan art portraiture and the online platforms for its dissemination is another influence; sites which have fallen a bit out of favour such as tumblr, deviantart, the fanart subreddit, etc. Finally, the tween/early teenage bedroom with its many posters of fan subjects. The repeat pattern of the wallpaper also references the Laura Ashley-type wallpaper of the 90s that I grew up with, and am seeing pop up again with the rise of cottagecore.

My brother, my cousin and I were big sci-fi nerds growing up – Star Wars, Star Trek, and the books of Ursula Le Guin were all a part of my childhood. It still has an influence as my labrador is called Obi and I still love reading sci fi (though I might label it speculative fiction to pretend I’m more intellectual haha).

That’s a very hard question and it would change almost every day!

If I had to choose my favourite band would be Sonic Youth as they fused music, noise and art so well, recently I’ve been listening to the American composer Moondog a lot, he fits in with my love of ‘outsider’ music and art – people that aren’t traditionally taught.